Ever since I started gardening, I have read about composting. I checked out books from the library, read articles online, saved food scraps in the kitchen and tried (confession: I might not have given my best effort) to compost. Despite my reading, I always felt like I was missing something or that it was just so complex I wasn’t absorbing all the information.

How to Compost – The Lazy Way

When we moved, we were torn. Should we get a worm composting bin, create our own with leftover chicken wire or buy a rotating bin? And then, I stumbled across this TED talk that simplified the whole process. Granted, I took it with a grain of salt, and I know that composting can be so much more than what he is describing in the video. However, I am thankful for the simplified version he explains. And, though you may not think so when you first start the video, he is quite entertaining!

Disclaimer: This is a TED talk that you don’t really need to see. I used to listen to TED talks on my commute to work, and occasionally I would have to re-listen at night, so I could see all the images being shown or the amazing things the person was doing in action. That’s not the case here. So feel free to listen while you clean the house or save it for a drive!

I don’t know about you, but this made composting seem like a breeze. Do you ever overthink things? I tend to overthink most things, and this talk snapped me right out of it and into action. It came at just the right time, too.

We had all of our fall leaves bagged up and in the backyard waiting to be composted. After watching the talk, I decided to mow/shred the leaves and get going. So far, we are just using shredded leaves, grass clippings and used coffee grounds. I know our girls (chickens) are delighted to continue getting our kitchen scraps for now! 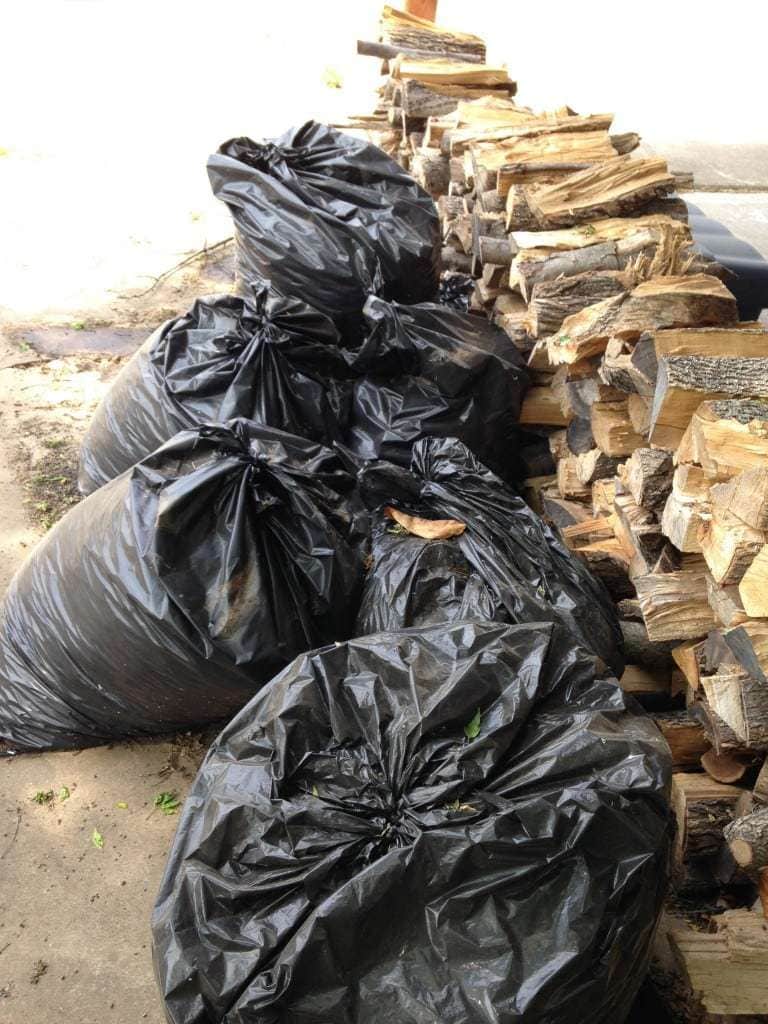 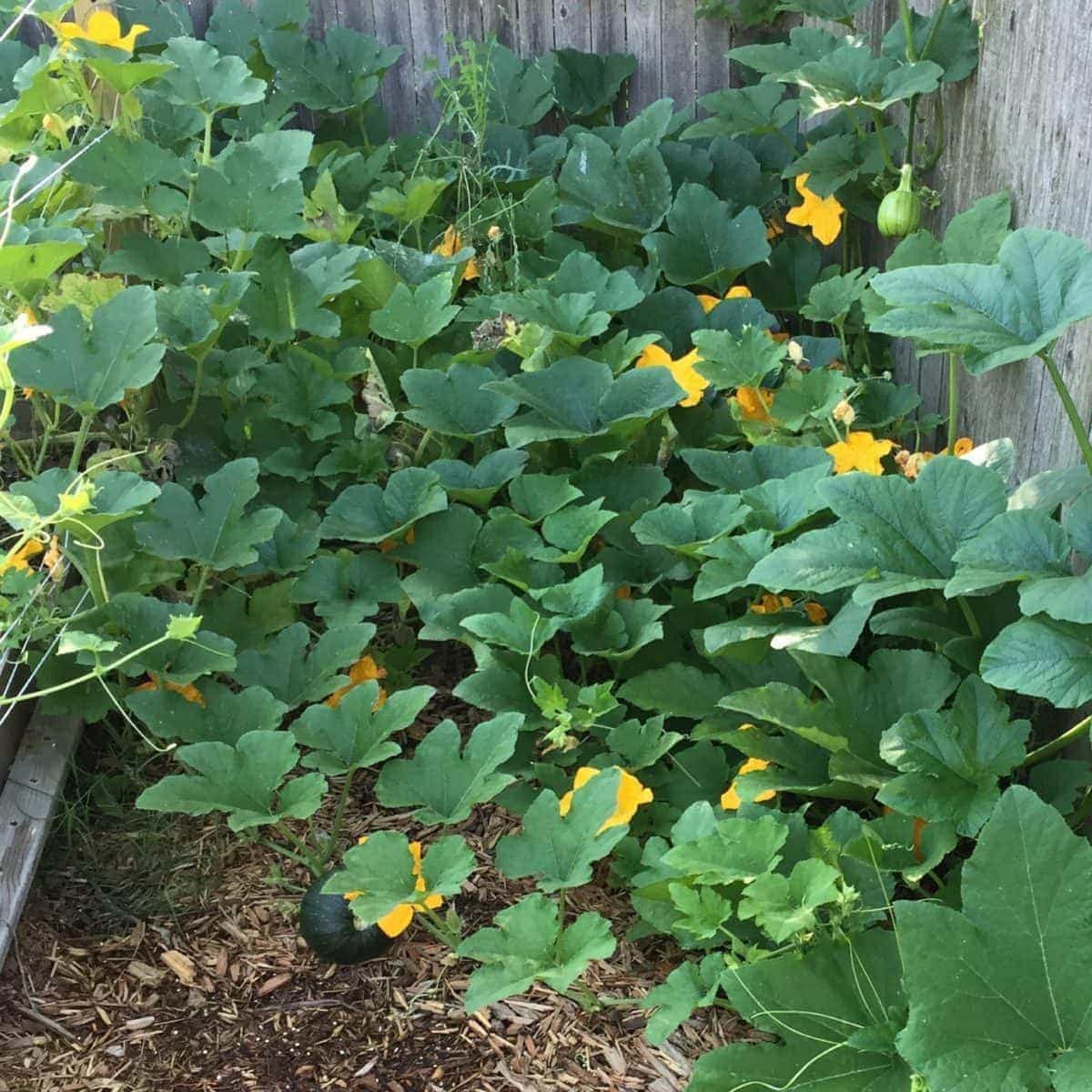 UPDATE: We are now adding kitchen scraps that our chickens don’t enjoy to our compost pile as well. We aren’t always great at turning it, but we found out recently just how well it is working when we had a few pumpkin plants sprout right out of the compost pile.

We grew Sugar Pie Pumpkins last year and must have tossed in a few seeds to the compost pile because we have an abundance of Sugar Pie Pumpkins now. We have already harvested multiple pumpkins and turned them into muffins, pies, soups and vegetable sautés, and we are still finding pumpkins hidden all around the yard. Check out the one below in the shrubs. I must have walked by it a dozen times before noticing it.

The success of these pumpkin plants has been the biggest testament to composting for us! If you aren’t composting yet, start now and you won’t regret it. 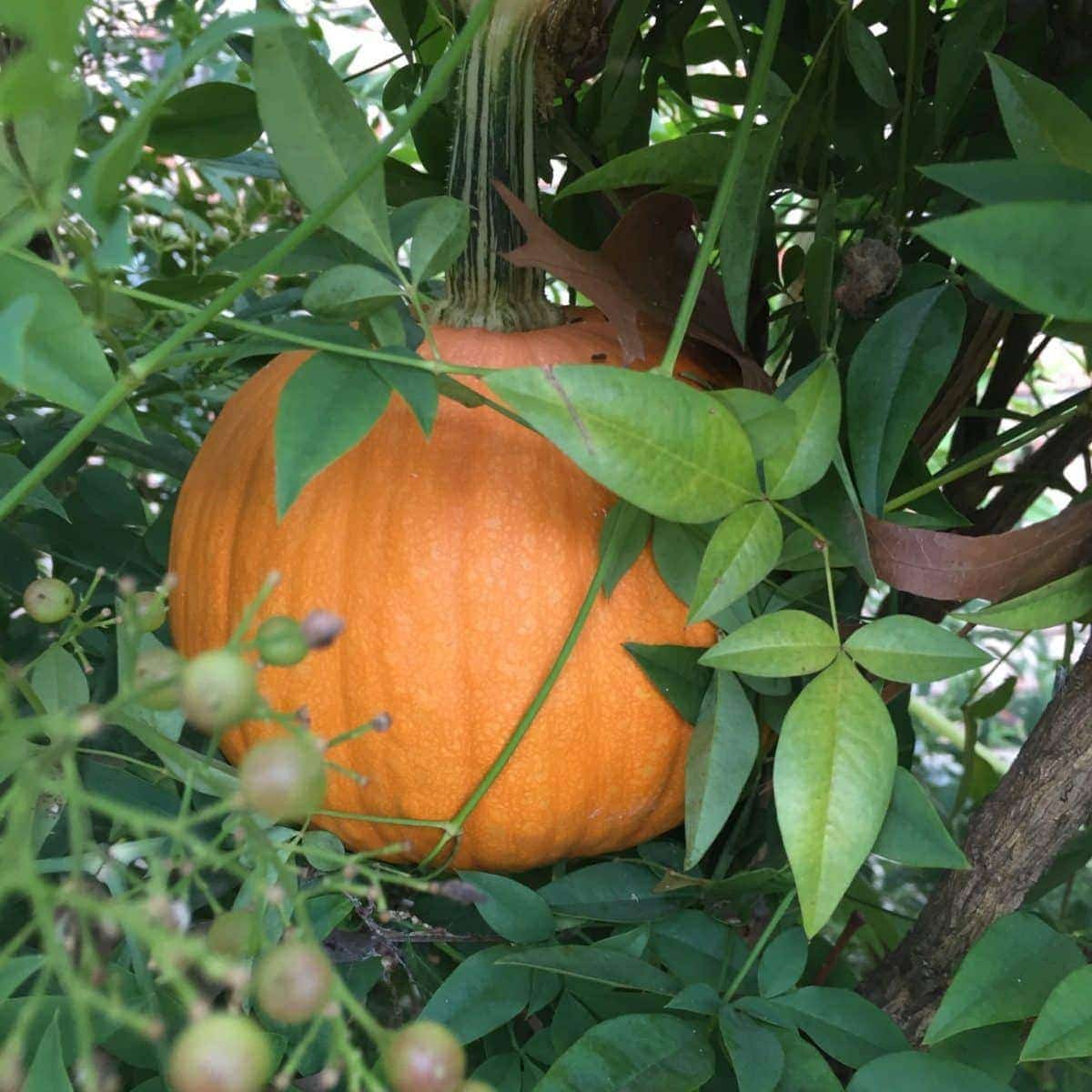 How to Compost with a Three Bin System

UPDATE: After researching different compost bins, I decided on this three bin compost system for a couple of reasons.

First, I love that it has three bins because we cook almost all of our meals, so we always have lots of kitchen scraps to put to good use. I didn’t want to miss out on using any of our scraps because we had to wait for the compost to be ready. This three bin system allows us to have compost in three different stages at one time. We use the first bin for fresh kitchen scraps, and once it’s full, we move it to the second bin so it can continue to decompose without having more scraps added to it. Once the second bin is full, we shift the compost over again. By the time the compost makes it to the third bin, it’s ready to use, and we didn’t have to pause our plan in the meantime.

The second reason I decided on this system is because we could make it ourselves – though I use “we” loosely because it was about 99% my husband’s doing. He looked over the plans, bought the supplies and built the entire frame. I stapled the chicken wire to the inside once he was done. Thanks again, babe!

Ultimately, this has been a huge success because it matches our needs really well.

Each system we have used has worked well for us at the given time. However, if I were starting out now and knew I’d be composting for the long-term, here is what I would use:

I hope this helps you select the right system for your gardening needs! Creating your own compost will save you time and money and empower you to have a sustainable garden.

Success! Now check your email to confirm your subscription and receive your Plant Families spreadsheet!

2 thoughts on “How to start composting (the easy way!)”

Hi, I'm Kara Bova, and I'm working on a goal to grow the majority of my family's produce. Read more...